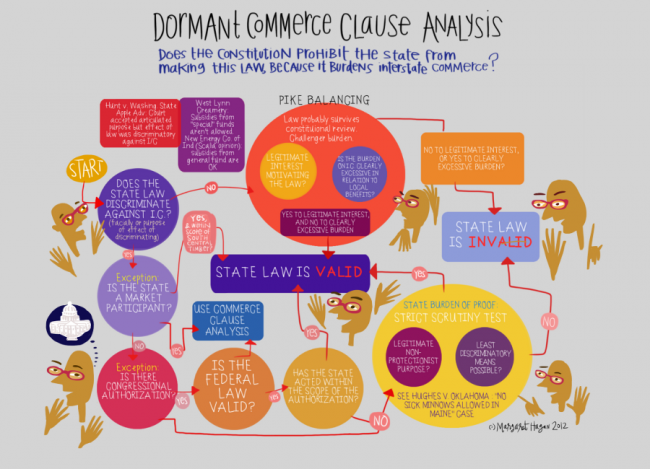 Today’s readings talk about the so-called “switch in time” that happened in 1937. It’s clear that the Court’s interpretation of the Commerce Clause–which was in stark contrast to the more expansive interpretation demanded by a variety of New Deal Programs–was a thorn in FDR’s side. His so-called “court packing plan” was framed as a solution to the high workload pressures facing the Court, but nobody ever believed this was FDR’s real purpose.

The public and members of Congress, who roundly supported FDRs other New Deal policies, reacted quite negatively to the proposal. But this isn’t why the plan was never implemented. As your textbook notes, the worst of the battle “was averted in large measure by the actions of the justices themselves” (Epstein and Walker 2014, 429).

The classic version of this story posits that Justices Roberts and Hughes changed their position on the constitutionality of many New Deal programs in direct reaction to the president’s threat to pack the Court. But why would justices–with their life tenure, guaranteed salary, and seeming independence from the political branches–bend to such pressure?

The classic version of the tale argues that it probably has something to do with protecting the legitimacy of the Court. Roosevelt’s court-packing plan was a transparent attempt to bully the Court into submission; it was clearly a shot at the Court’s independence from the political branches. Were the Court to suffer this humiliation, the ability of the Court to oppose the policy preferences of the dominant national governing coalition would be forever sabotaged.

Paper Topic #18: What explains the seeming “switch in time?” Was this just a continuation of an evolution of policy positions on the part of two of the justices that might have happened regardless of FDR’s court packing plan? Or was the switch a direct result of this pressure? In any event, did the switch make a difference in the public’s esteem of the Court (or of FDR, himself)?