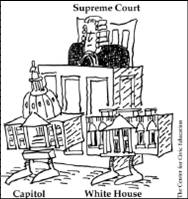 The conventional wisdom about Marbury v. Madison is clear. It is perhaps best summarized in this short post called “Marbury v. Madison” on the History Channel website. In that last little section, the author of this blurb is clear about the implications of Marbury v. Madison. But is this accurate? From your close reading of the excerpt in the textbook, think about what kind of constitutional review Marshall is actually engaged in. Everyone from your middle school civics teacher to justices on the Supreme Court cite Marbury as the source of the Court’s power of judicial review. But are they right? In today’s legal landscape, we think of judicial review as a broad exercise of a constitutional veto against laws of Congress or state legislatures, as well as against the actions of the federal or state executive branch officials. We assume that the courts have the ability to strike down all sorts of laws, not just laws dealing directly with the way the Court operates. Using this wide definition, can we really credit Marbury v. Madison for judicial review?

Paper Topic #3: Have we overestimated the importance of Marbury v. Madison in creating the power of judicial review out of whole cloth? Were subsequent exercises of judicial review consistent with Marbury, or were they extensions of a limited power developed in that case?

Suggested Reading: Whittington, Keith E. and Amanda Rinderle. 2012. “Making a Mountain Out of a Molehill? Marbury and the Construction of the Constitutional Canon.” Hastings Constitutional Law Quarterly, 39:823.